The day before Easter.
Astarte’s season,
before the branches are so heavy with leaves
that there is no sunlight
below them,
only a dappled, cool shadow,
and skies are bluer and wisped with
high frivolous clouds
limned in spring sunlight.
My neighbor, who is a poet
in Polish and English,
calls this the
coming out of darkness:
out of winter’s short days, growth pushing up
out of the dark soil, buds furling
out from the closed knobs of branches,
the weak little chick peck-pecking
out of the wet dark of the shell, and she herself
out of the dark hopelessness
of her Lord’s death
into the light of His resurrection.

Six feet apart, we talk in the courtyard,
I in my mask and nitrile gloves,
she with her cigarette
and apron from the Easter meal
she’s cooking, each food a symbol,
as a third neighbor, eighty-seven, joins us
wearing green woolen mits
to take out her trash.
We stand in the spring sunlight
pouring down on us,
Jew, Buddhist, and Catholic,
faces turned to the bare branches
not yet in flower.

Tomorrow I’ll bake leavened bread
and break it alone
in my quarantine of sunlight
not knowing what shadow
summer might bring us.

Posted at 09:27 AM in Doctrine, Quarantine Thoughts, thought for the day, Words | Permalink | Comments (0)

The hoopla this week about the May 21st Apocalypse (capital A) has shown me that you can take the girl outta the religion but ya can't take the religion outta the girl. Or at least outta her hindbrain. Having been a more than 20-year member of what I realize in retrospect is an apocalyptic religion, I've found it hard to shake those nasty little "but what if they're right?" voices every time I hear a doomsday prophecy.I spent so many years living with the idea that the World (not the planet, but the current systems of governments and societies) was going to one day cease to exist in a cataclysmic event, I still get a little frisson of terror whenever I hear mad prophets. Like the doctrine of hell (which was not part of our belief system), the Apocalypse is just another way to keep your followers towing the line and donating, and the core of that success is fear: fear of death, fear of rejection, fear of making the wrong choices.

The tragedy of living like this is that it stunts your life. People who leave my former religion (and other similar ones) are often embittered not just by their experiences, but by what they've missed. The emphasis in these religions, more than mainstream ones, is always on the world to come, whether it's heaven or a New World Order of some kind here on earth. You're told that your life here and now is just biding time, that you shouldn't invest too much in it, or make big plans, or try to get rich, or have any sort of ambition that doesn't involve serving God. If you do have desires outside that narrow focus, you're accused of being "worldly," i.e., heathen and ungodly, or just plain wicked. Serving God almost invariably involves not having a lot of money, or a good job, or a nice home. As a consequence, members spend a lot of time policing each other for their materialism and focus. But without ambition of some kind, without a desire to improve yourself, one's life remains stagnant and stunted, in more ways than one. 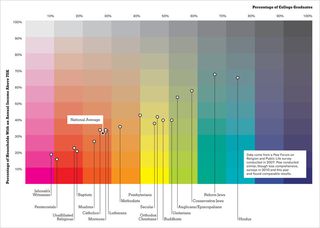 For instance, according to data from the Pew Forum on Religion and Public life, Jehovah's Witnesses are among the poorest and the least-educated of religious groups. There's a reason for this. College attendance has, until lately, been actively discouraged. It's been seen as the quickest way to get your children to leave the faith, and there's some truth in that. A good college education gives people analytical abilities and exposes them to new sources of information. It's hard to swallow the party line hook, line, and sinker when you start asking questions. Absolute faith (though not spirituality) relies on unquestioning belief as well as the desire to belong. I'm not saying anything new here, but one of the ways to get people to not question your doctrine is to make them afraid of losing something precious, like their lives, their friends, their community. This is what apocalyptic dogma is all about. And fear is a really effective brainwashing tool, no matter how well-educated and analytical you are.

So most of the people I grew up with who were JWs got married young, didn't go to college, wound up working blue-collar jobs for not much money. But I went off to college, thanks to my mom's firm belief in education for women and the necessity of women's economic independence. For this, both of us were vilified as bad influences. Bad enough my mom was married to an unbeliever (though fellow traveler). Worse that she planned to send me off into the world, instead of making sure I ended up barefoot and pregnant, volunteering 20 hours a week to the door-to-door ministry. But I couldn't see myself staying in Northern Michigan for the rest of my life, and I had no desire to get married and have babies, and even less to proselytize. I was too intellectually hungry, and ironically enough, five hours of Bible study a week helped make me that way; that was were I got my first tastes of history and literary criticism, where I learned the rudiments of close reading, and the wondrous complexity of creation. So off I went to college, where I did, indeed, gradually "fall away" from the religion I'd been raised in, as I learned more about history, science, and biblical studies. But the fear of the Apocalypse, of making the wrong choices, never left me.

When I was a kid, I used to love reading post-apocalyptic novels. One of my favorites was A Canticle for Liebowitz by Walter Miller, published the year I was born. If you haven't read it, it's worth the effort, not so much for the view of life after nuclear war as for the big picture Miller paints of the cycles of history, the rise and fall of civilizations, and how religion creates its doctrines and saints. That long view is one of the ideas that influenced my interest in history, and the long view of its cycles I've always found so fascinating. In addition, I gobbled up Frank Herbert's The White Plague, Nevil Shute's On the Beach, Pat Frank's Alas, Babylon, and a lot of J.G. Ballard and Philip K. Dick. Need I mention Blade Runner? This was sparked by the same impulse that makes people watch monster movies; everybody likes a good scare. Most of these apocalypses were death by nuclear war or natural disaster, not fire from heaven or the manifestation of God's power on earth, so they weren't frightening in the same way. What I was really fascinated by was the way society began to pick itself up and put itself together again afterwards, and what the critical mass of people to do this was. There were only 3 million JWs then; was that enough to repopulate the earth and maintain civilization? Or were we going to crash back into the Dark Ages? That seemed more and more likely the longer I ran the numbers and studied history. And that grew less and less attractive too. 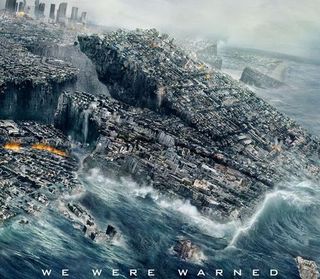 As I became more conscious and aware of the world around me, disasters didn't seem so interesting and the people I came in contact with didn't seem so horrible, for all their worldliness. And, I discovered, there were some amoral assholes inside my church too. The Apocalypse began to seem more horrible, more arbitrary, more malicious. My taste for post-apocalyptic fiction finally bottomed out with the AIDS crisis. The idea that a loving God would visit that kind of horror on decent people who didn't worship Him in this particular way became more and more abhorrent to me. That was not what I wanted in a god. After a while, I wasn't even sure I wanted a god at all. They seemed to be more of a pain in the ass than not. Now, when I watch the previews for something like the movie 2012, images of the wholesale slaughter of what Douglas Adams called "mostly harmless" people don't give me a cheap thrill, they nauseate me. But it still scares the crap out of me. There's nothing rational about it; it's completely visceral, a conditioned response. And that, I totally resent.

There are too many real problems in the real world that need to be fixed or at least mitigated for me to waste time being afraid of an imaginary disaster. I resent the way this dogma blinds people to the disasters that are going on around them right now and makes them think only God can fix these things, the way it strips away responsibility for crapping in our own back yard, the way it fosters learned helplessness. We've got a genuine apocalypse looming, one that's of our own making—climate change—that the same people who spout off about the Rapture are happy to ignore. Well, I got news for you folks, and it ain't Good News: nobody's going to save you or any of us when this natural disaster happens. Start scaring your people with the real thing. We need all the help we can get. Turn some of that money and effort into education and influence for saving the world we've got now, not waiting for someone else to destroy it.