The solstice is a time of new beginnings. The light starts to come back, overpowering the dark, the seasons turn, and we hunker down for the winter, which is a time of introspection and creativity. So it seems, I hope, oracular that I had the day I did yesterday. I've started doing some electronic housecleaning, getting my bookmarks and passwords back in order for accounts I haven't touched in several years. These are mostly creative accounts connected to my website building, or bookmaking, or my now defunct teaching and freelance careers. Some of them are old enough that I've already been scrubbed from the sites themselves, which is fine. Most of those are obsolete or I don't use them anymore anyway. It's a little sobering that it's been that long though.

I'm also trying to change the way I work, so I set a repeating timer for 20 minutes and then got up out of my chair and did something else for varying amounts of time when it went off. Peed. Made the bed. Did the dishes. Looked over the mail. Had lunch. Made tea. (I just found a great Darjeeling from Arbor Teas in Ann Arbor. Fragrant and lush.) Planned dinner. Cooked. Stood up and sang a bit, which felt great! Ran out to do shopping. Swept the floor. Emptied the catbox. I thought it would be annoying, but it was actually good to get my ass out of the chair and not get sucked into the Intertubez so deeply, as deeply as I have been. I've also been weening myself off Facebook in preparation for my exodus in January (which won't be a total one, at east not yet; I'll be over at MeWe, too, for those who'd like to join me, just not as often, either). 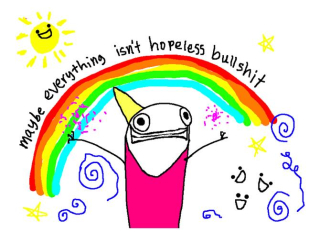 credit: Allie Brosh, Hyperbole and a Half

All of that electronic housecleaning and organizing seems a hopeful (and useful) step in my personal rehabilitation. That's what this feels like: rehab. I'm still feeling a little displaced, or maybe "unplaced" would be a better description, in an apartment that's not quite home but becoming it, in a life that's very different from one I knew for 25+ years. Yesterday was a bit like rediscovering that old self, or maybe unearthing her again (hopefully not like a zombie or vampire). I'm reminding myself of what I used to do when Facebook hadn't become an escape and a focus for my energy and rage. First thing in the morning, I used to read Arts & Letters Daily, which is a great aggregater for the kind of stuff writers and readers read. I used to read the comics every day, so I spent some time weeding my comics bookmarks, and adding some to Feedly. I reconnected with some old 2D friends, major portions of whose stories I've missed and may never catch up on, which makes me a bit sad. I may have to buy books to do that. (Oh no! Not that! Don't make me buy books!)

I also spent part of the day cleaning up my poetry market bookmarks and adding new ones. It's sad to see how many journals have folded in the time since I was regularly sending work out. But there are plenty more to take their places and lots of venerable ones hanging on. I won't start with how it pisses me off to have to pay to have my work read, which is one of my many soapboxes, this one about how our government doesn't support the arts in this country. Regardless, I'm at least thinking about submitting work again, which I haven't done much of, lately. And starting to act like a real writer again, whether I'm writing or not. It's a business if you're serious about it and some of your time has to be spent doing the business end. So while I'm waiting for my brain to clutter itself up again with voices, this seemed like a good way to spend my time.

And it led to a really wonderful and exciting day-making interchange with an editor who seems like she might be a new friend.

I've been wondering what to do with all the poems I wrote about T-Rump in the first year of his reign, poems I wrote in a white-hot rage, one a day for a long time, until I was worn down and couldn't keep up with all the acts of cruelty and vileness. They were posted on Facebook and a resurrected blog I'd run during W's torture regime, The Perfidy Report. Fifty-four poems later, Days of Perfidy became a collection I despaired of ever finding a home for. Then, while trolling through the Poetry Submissions Portal on Facebook, I ran across a call from Headline Poetry & Press, which is all about political poetry. I looked over the submission guidelines, which included an email address to drop the editor a line if you had questions. I didn't just want to upload the whole manuscript so I shot her a note instead, explaining the manuscript's genesis and that the poems had been published on The Perfidy Report and giving her a link, thinking I'd hear back in January at the earliest. Much to my surprise, she responded only a half hour later with an enthusiastic interest. That started a really pleasant and fun back and forth email chain of the kind you have with new and interesting people, asking questions, answering them, sussing out what each of you like and are like.

It's always gratifying when people like and are interested in publishing your work but it's even better when you make a personal connection with someone who likes your work. This was really great because I don't often email editors with personal requests like this. Like, never, in fact. Maybe I'm getting bolder in my old age. I'm not sure I can explain why this whole thing was so delightful. In part, it was the speed of the reply, the curiosity and openness and collaborative nature of the person on the other end and her sense of humor. I realized this morning that she reminds me, at least on paper, of my grad-school friend Gwen, another poet and generous soul that we lost to cancer a few years ago. Anyway, it was a really delightful experience back-and-forthing with her. Just what I needed to restore a little faith in myself. 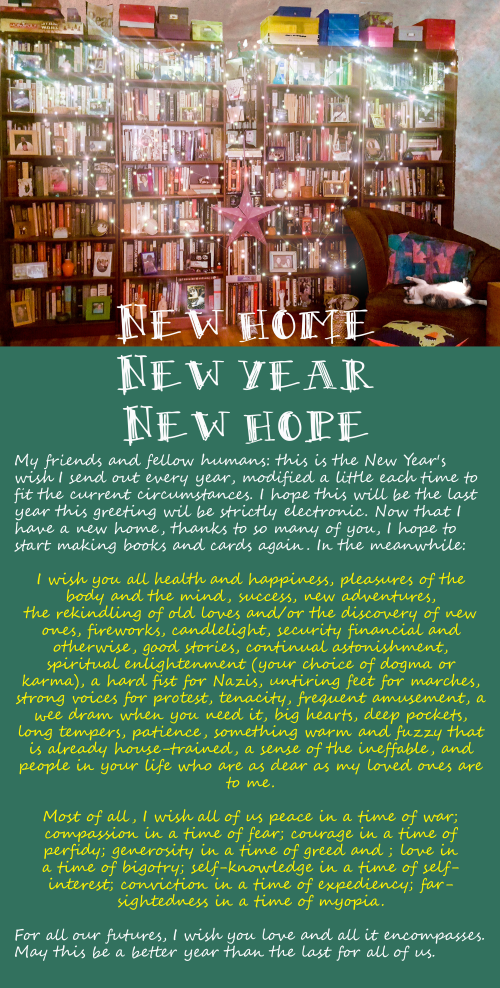 Posted at 09:10 PM in Doing Good, Happiness Project, Life, the Universe, and Everything | Permalink | Comments (0)