The Valorization of the (Academic) 1%

Jason Brennan is at it again (Wayback machine link, just in case, because Jason has a bad habit of deleting anything that receives criticism he doesn't like) and I've decided to tackle him here, rather than on the NFM blog, because it's a waste of NFM resources to reply directly to this nonsense. But I'm happy to waste my own resources doing it. School doesn’t start for another week.

A quick recap: Brennan (PDF) surfaced a few months ago with an article (now deleted; see above) about how adjuncts (more on that term later) are responsible for their own suffering by agreeing to teach for poverty wages, when they could just go sell insurance instead (hence the moniker Prof. Geico). Not only is Brennan likely to delete his posts if they get too much of the wrong kind of attention, but he’ll delete comments he doesn’t like and both he and his crony Phillip Magness aren’t above closing of the comments portion of their blogs altogether while freely commenting on dissenting venues themselves. Brennan, as his group blog indicates, fancies himself a "bleeding heart Libertarian," which seems largely like an exercise in contradiction, since Libertarian hearts bleed for no one but themselves. In his new essay, "The Valorization of Envy," he proudly calls himself an "academic 1-percenter" whose work is certainly NOT made possible by the underclass of adjuncts teaching general education classes to free him up for research. That's probably more true now that adjuncts at his home institution of Georgetown have unionized.

Before we go much farther, a word or three about the term "adjuncts," especially as it comes into play with a crony of Brennan's, Phillip Magness, whom I also wish to address here. Within adjunct activist circles, the word "adjunct" covers a world of hurt: it generally includes any contingent faculty whose working conditions are precarious and untenured and/or off the tenure track: full-time contract professors and program managers with some benefits and security but almost always lower pay than tenured or tenure-track; part-time professors with extended contracts, paid by the credit hour; part-time professors hired semester to semester or "just in time"; part-time instructors who have full time jobs in industry (the original meaning of the term); part time instructors who rely solely on academic work for their income; visiting professors; graduate teaching assistants; postdocs. There are a number of terms used to refer to these working conditions: adjunct lecturer, adjunct professor, adjunct instructor, adjunct assistant professor, instructor, lecturer—you get the idea. In Canada and Australia, they are called sessionals, in the UK, fractionals. The problem with the terms is that universities are free to call these workers whatever they want, so there is no single term that covers them all or all the different positions they occupy. The commonality is in the precarity and exploitative nature of their positions, in contrast to the (now less so) security of tenured faculty, who, no matter how the statistics are cooked, remain a mere 25% of the faculty (down from 70%). So when I say "adjunct" in this essay, the term includes all these various working conditions. I'll come back to this when I address Magness's specious arguments.

On to Jason Brennan's newest essay.

In "The Valorization of Envy," Brennan sets out to critique Richard Goldin's Counterpunch essay, "The Economic Inequality in Academia." First, let me just say what a dick it makes you seem if you think that people working for equality and fairness in society are merely envious of "people like you." It also makes you look stupidly arrogant if you think everyone who's not like you envies you. It's like reducing Freud's concept of penis envy to the envy of the actual organ rather than the undeserved social power it represents. It's a juvenile argument that should be confined to the playground, but it's also one rooted in a deep fear that the people working for social and economic justice will redistribute the wealth before you get yours. And in a deep hatred of the very concept of equality. But enough of the free armchair shrinkage. Brennan's undoubtedly got a good health plan that would pay for the professional variety. But he'd have to admit his insecurities first.

Reducing Goldin's analysis to an "envious rant," as I just reduced Brennan’s critique to a juvenile argument filled with ad hominem insinuations, doesn't replace sound argumentation. It's fun, but it proves nothing, and it really has no place in the academic conversation. Attributing motive and making personal attacks are the kinds of tactics used by those without solid ground to stand on. So let's see what kind of ground Brennan's on.

First we get the argument that there aren't as many adjuncts as the activists like New Faculty Majority (characterized on Phil Magness's twitter feed, especially me personally, as "crazy cat ladies") claim, for which, see above. Brennan cites his pal Magness, who makes artificial divisions based on the vague nomenclature used by under-reporting universities to characterize their precarious faculty. Aaron Barlow of AAUP's Academe blog posted a host of graphs to refute this, but again, it depends on how you define adjunct faculty. Unless Brennan and Magness agree to stipulate that non-tenure-track full-time faculty share issues with "just in time" part-time adjuncts, there's not much more to be said.

Part of Brennan and Magness's refutation of this idea of commonality is their focus on R1 universities like their respective institutions, Georgetown and George Mason. I'm not sure why they're so blinkered about this, except that they both work in such institutions. They are a small fraction of the total number of higher education institutions (around 400 or so out of approximately 4,700 total, not counting the for-profit sector). Where R1s fail to employ Magness's narrow definition of adjuncts, they happily employ and exploit graduate assistants and postdocs. More than one college has cut the number of part-time instructors to replace them with grad TAs because TAs come even cheaper and have a harder time unionizing because of their student status. 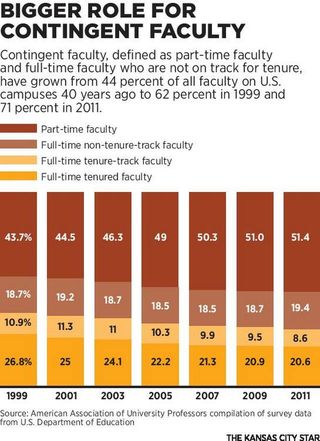 Next, Brennan claims that "contrary to what everyone keeps saying, the number of tenure-track faculty slots has been increasing over the past 40 years." Nobody has said this. What we have said is that the proportion of non-tenure track to tenure track has been increasing. That's a big difference. Furthermore, the table he and Magness cite as proof actually shows the proportion of full-time to part-time, without any tenure distinctions at all. We can assume that part-timers are not tenured or tenure-track, but we cannot assume that all full-timers are tenured or tenure-track. But that same table shows the proportion of part-time to full-time hires narrowing drastically until they are neck in neck. So even if only half of those full-timers are untenured, the growth of untenured is still outstripping tenured. Here's a better graph illustrating that growth. Note the growing proportion of non-tenure-track faculty of both kinds, just from the turn of the century. It's even greater from the 1970s.

Next, after some more fun but semantically null snarkiness about postmodernists and Koch infiltration and accusations of lying about making minimum wage (the credit hour fallacy, anyone?) Brennan turns the lens back on himself again, reminding us that he is an "Academic 1 percenter":

The implication, of course, is that Brennan's "making bank" because he's an academic hotshot.

First, I would ask him how many general education courses he teaches, and if the answer is none, who does teach them. Because that's generally where the adjuncts are. And because the adjuncts are teaching the most time-intensive courses with the most grading, that frees him up to do his research, while adjuncts, often scrambling between two or three institutions, have no time or monetary support to do research. While anybody can apply for a Fulbright, adjuncts are generally ineligible for travel funds to go to conferences and for sabbaticals to have time to pursue their own projects. That's just as true at Georgetown as anywhere else. In fact, Georgetown's own Kalmanovitz Initiative for Labor and the Working Poor produced a report that illustrates this. (See especially pages 9 & 10.) If Georgetown pays its adjuncts better than most places, it's because their union helped negotiate a good contract and because Georgetown has a long history of just employment practices as part of its Catholic ethos. Brennan seems not to realize that he benefits from those too, but more so than his adjunct colleagues. FYI, Dr. Brennan, Georgetown employs about 650 adjuncts. That's hardly the "few" that you claim. Perhaps they are invisible to you in your elite tower.

The next bit of Brennan's argument is largely an ego-driven assertion of the supremacy of research over teaching, of the sort I've heard before from people who don't like teaching. It's a chicken-and-egg argument without winners. They're both equally important. Some people do one better than the other, but it's impossible to say that research hasn't been overvalued in the academy when someone like Peter Higgs, of Higgs boson fame, asserts that "It's difficult to imagine how I would ever have enough peace and quiet in the present sort of climate to do what I did in 1964" with the pressure of publication currently in vogue.

Brennan then complains about Goldin's characterization of academic hiring practices as a lottery. I can see why Brennan doesn't like this, as it makes his own hiring look less merit-based. Again, that's not actually what Goldin says though. He calls it "something of a lottery" (a difference without much distinction, true) but then goes on to explain that hiring committees have been found to pretty much replicate themselves in their hiring practices: white, male, Ivy. It's one of the major problems in STEM disciplines, especially physics.

Finally, Brennan gripes peevishly, "If madjunct crowd [sic; adjunct activists] sincerely believed that academia is a lottery, they would not act surprised or indignant that they lost and would move on with their lives." In other words, just shut up and take what we hand you, whether you think it's just or not. I've got mine, fuck all y'all. This is apparently the best argument Brennan and his Libertarian tag-team partner Magness can make, because neither of them can do data analysis for shit.

In many ways, all of this is beside the point. The core issue here is the uncollegiality of Brennan and Magness’s attitude. As fellow educators, what is the point of their hostility to financial and labor equity for their colleagues? Or is it that they don't really see adjuncts as their colleagues? (Ironic in Magness's case, because he is one.) The phrase that comes to mind is “punching down,” because none of the people this dynamic duo are griping and complaining about have any power to do anything against Brennan and Magness but what I’ve just done: excoriate them in public via an obscure blog or some other publication. What they’re doing is a bit like kicking puppies. Or crazy cat ladies.

So what makes you all such shitheads? What are you afraid of if adjuncts gain equity in pay and position? Why waste your time on people who are virtually powerless? Why the name calling and derision? Who took your toys, boys? 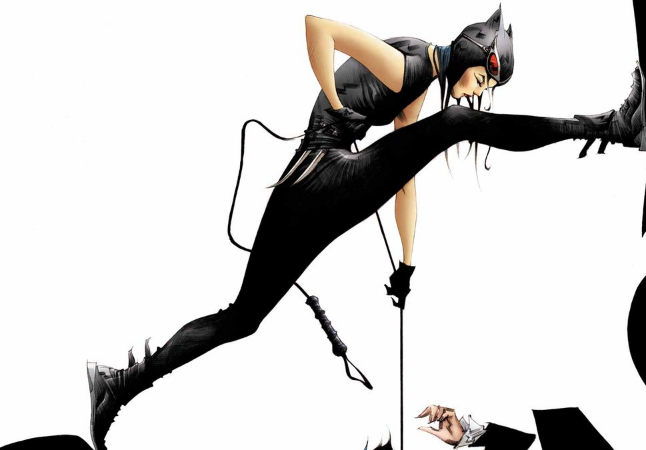 You want Crazy Cat Lady? Here. Let me get my Docs on.

UPDATE: Phil Magness responds on Twitter (where I have been blocked) with more of his usual selective editing and complete lack of cogency. I guess I hurt his feefees, but it's okay if he slams an entire class of colleagues. 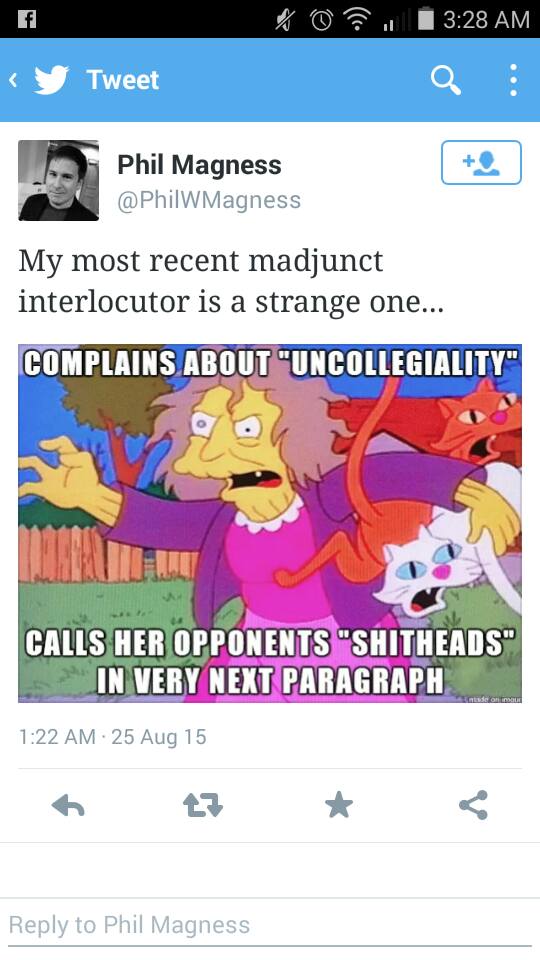