It's Banned Books Week (Sept. 24th-Oct. 1st), again, and it's hard to believe that in a country based on free speech, we should even have such a thing. But we do. And this is why librarians have always been my heroes. Nobody protects our right to read whatever we want, no matter what age we are, more strenuously than librarians (independent booksellers are a close second). When, after 9/11, the FBI decided they wanted to see what books some people in America were checking out of the library, Connecticut librarians not only said, "no freakin' way," they filed a lawsuit to challenge that part of the Patriot Act—and won.

Banning books is a form of thought control, and thought control is an attempt to make people conform to one particular idea of social behavior. Seems obvious, right? Of course, when these protests are made, the protesters have hardly ever read the book in question in full, if at all. Someone has said this book is "obscene" or "subversive" or "anti-American" or "dangerous," and they've jumped on the bandwagon. What makes a book "dangerous"? Anything that challenges the status quo, whether it has to do with religion, sexual orientation, or political thought. So why do some people in the Land of the Free think they have the right to decide what I can read? How is that not "anti-American" in itself?

As an example of the kinds of books that are frequently challenged, there's this list of 46 of of the books on the Radcliffe Publishing Course Top 100 novels of the 20th Century that have been banned or challenged at one time or another. Here's the list: 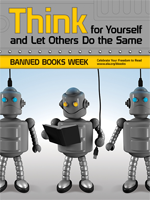 2. The Catcher in the Rye, by J.D. Salinger
3. The Grapes of Wrath, by John Steinbeck
4. To Kill a Mockingbird, by Harper Lee
5. The Color Purple, by Alice Walker
6. Ulysses, by James Joyce
7. Beloved, by Toni Morrison
8. The Lord of the Flies, by William Golding
9. 1984, by George Orwell
11. Lolita, by Vladmir Nabokov
12. Of Mice and Men, by John Steinbeck
15. Catch-22, by Joseph Heller
16. Brave New World, by Aldous Huxley
17. Animal Farm, by George Orwell
18. The Sun Also Rises, by Ernest Hemingway
19. As I Lay Dying, by William Faulkner
20. A Farewell to Arms, by Ernest Hemingway
23. Their Eyes Were Watching God, by Zora Neale Hurston
24. Invisible Man, by Ralph Ellison
25. Song of Solomon, by Toni Morrison
26. Gone with the Wind, by Margaret Mitchell
27. Native Son, by Richard Wright
28. One Flew Over the Cuckoo's Nest, by Ken Kesey
29. Slaughterhouse-Five, by Kurt Vonnegut
30. For Whom the Bell Tolls, by Ernest Hemingway
33. The Call of the Wild, by Jack London
36. Go Tell it on the Mountain, by James Baldwin
38. All the King's Men, by Robert Penn Warren
40. The Lord of the Rings, by J.R.R. Tolkien
45. The Jungle, by Upton Sinclair
48. Lady Chatterley's Lover, by D.H. Lawrence
49. A Clockwork Orange, by Anthony Burgess
50. The Awakening, by Kate Chopin
53. In Cold Blood, by Truman Capote
55. The Satanic Verses, by Salman Rushdie
57. Sophie's Choice, by William Styron
64. Sons and Lovers, by D.H. Lawrence
66. Cat's Cradle, by Kurt Vonnegut
67. A Separate Peace, by John Knowles
73. Naked Lunch, by William S. Burroughs
74. Brideshead Revisited, by Evelyn Waugh
75. Women in Love, by D.H. Lawrence
80. The Naked and the Dead, by Norman Mailer
84. Tropic of Cancer, by Henry Miller
88. An American Tragedy, by Theodore Dreiser
97. Rabbit, Run, by John Updike

If books hold up a mirror to our society, some of us must not like what we see. But even if we don't, there's no sense killing the messenger.

Challenges to kids books are particularly galling to me. My parents never censored anything I read, though they would sometimes caution me that a book I'd chosen might be "too old" for me, and I might not like it, or might not "get" it. Sometimes they were right, but sometimes I wound up loving something they didn't think I would. Mom sometimes despaired of my love of comics, but basically, if I had a book or magazine in my hands, that was okay with them. I even read my dad's Playboys. And yeah, there was some good journalism in them. Seriously. Because my reading wasn't censored, guess who became the font of information on sex and reproduction and birth control for my friends in junior high and high school (and sometimes even college)? Not unusual for kids to get that information from each other, except that the information I had was actually accurate, not rumor.

According to the ALA, there were:

With kids, the fear at the heart of banning some books is that your children might somehow be harmed by being exposed to ideas about sex, gender, nonconformity, death, suicide, drugs, or actual cuss words. That's right: real, live cuss words. I'm sure they've never heard those before in movies, on TV, on the playground or at home. I'm insulted on behalf of children that parents like these think their kids are that dumb, or that mentally fragile, that they think their kids are incapable of telling fact from fiction, or have never let their pure minds wonder about sex, death, drugs or what life is all about. Honestly, grownups are so stupid sometimes.