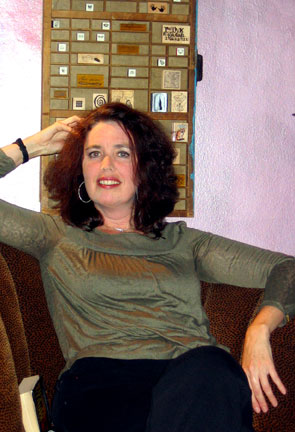 My friend Jean Courtney took her life yesterday and I hardly know what to say. This is the first friend I've lost to suicide, and though Jean and I had talked about it, and I knew it was an idea that she seriously entertained on her darkest days, I did not know she'd reached that point again. At left is Jean in May at my house, right before she was going to meet some old friends from high school in Parkchester. She seemed chipper then, if a little apprehensive, and determined to get the most out of her "up" mood, as if she knew it was going to disintegrate soon, as it did.

Very shortly afterwards, she moved into a new apartment, which she found very stressful but was pleased about, I think. There were some other stressful events and she let us all know that she wouldn't be visiting her Facebook account for a while. Then today, on her last post, her ex-husband (or wasband, as Jean called him) informed us that Jean had "passed peacefully from this life" at her apartment yesterday. Apparently, she left a beautiful note behind, though I have not read it.

Jean and I knew each other from our days at AKRF, when we were in what later became the Publications Department. We were somewhat less than editors, something more than mere word processors for the company's quite technical environmental impact statements. It was often high-pressure, deadline-driven work held to exacting grammatical and stylistic standards for which we were responsible, and Jean bore the pressure with more grace that the rest of us who worked there. She had a fantastic sense of humor, loved comedy and jokes, movies and celebrities, and could almost always find the humor in just about any situation. "Did you see [name of movie]?" she would say. "This is just like that scene where . . ." and it was! And the similarity would leave you chortling. Here's some of the movies she listed on her Facebook page: "Young Frankenstein," "A Clockwork Orange," "Religulous," "The Room," "My Suicide," "The Aristocrats," "Rear Window," "Borat," "Arsenic and Old Lace," "Pulp Fiction," "Lolita," "Dr. Strangelove," "North by Northwest," "All About Eve," "Bourne," "Sex, Lies, and Videotape," "Memento," "American Beauty," and "High Anxiety." You can see she had a taste not only for clever comedy, for for the darker dramas and psychological thrillers, as well as political satire. If the movies you like are some indication of what kind of person you are, Jean was clearly pretty complex.

In those days, Jean was a seeker. She was enthused about, by turns, just about every brand of New Age spirituality that came along, and some not so New Age, serially monogamous to all of them. She studied Sufism, reiki, and about a million other brands of faith and woo that I could not keep track of, all in the quest for happiness, or at least some explanation about why she was in so much pain. I tried to respect her search, but they always seem to fall short of her expectations or needs, some more than others, when the practitioners turned out to either have clay feet or be outright charlatans. Unfortunately, Jean seemed to be the type of person that the unscrupulous and predatory repeatedly take advantage of, emotionally and in other ways, something that contributed to her depression. It's not that Jean was an unthinking sucker; like all my friends, she had a quirky analytical intelligence, but I think her emotional need made her a little desperate. Once she'd seen through whatever flavor of the month religion/spiritual shenanigans she'd been involved in, she could be brutally analytical about their shortcomings.

We lost contact for a while when we both left the company but had gotten back in touch again about two years ago. Since then, I saw or spoke to Jean a couple dozen times, in various states of happiness. We ran into one another again at a Patti Smith/Television concert where we ogled David Byrne and Brian Eno hanging out in the back of the crowd with us. At some point prior to this, she had been hospitalized for deep depression and suicidal thoughts, gotten a psychiatric diagnosis and gone on disability, which actually seemed to be a relief to her. I think she felt she knew what was wrong now, and could stop searching for answers and just concentrate on being healthy and happy. She was seeing a couple of therapists and getting some good drugs, and confronting and dealing with traumas in her past, especially some of the harm done her by predators and the woo practitioners, about whom she was intending to write a memoir. From the stories she told me, it would have been a hell of an exposé.I wonder now if that might have been part of what broke her. I know she endured a lot of awful slander on some of the discussion boards she'd been on and some of the things people said about her were unconscionable, especially in people who are supposed to be following some kind of spiritual path.

There was a time when I would have been judgemental about Jean's suicide, but I've come to understand how, for some people, that can seem like the only sensible solution. That that is true is the real tragedy. For all the fantastic chemicals we now have for treating various kinds of mental illness, they're not by any means a cure-all. They work for some people and not for others; they work for a time and then not at all. They only alleviate some symptoms and not others. And sometimes the side effects are so horrific that it's better to be off them than on them. And our society does not treat the "mentally interesting" as Jean called herself, very well. When they can get disability, they live on the edge of poverty, if not right down in it. Housing is scarce, often substandard, and may take forever to get into. Funds to support you while you wait are laughably (cryingly, sobbingly) inadequate, for the most part, especially in an expensive city like New York. If your family wants nothing to do with you, or is the source of your problem, that makes it even more difficult. Who do you rely on then?

I understand Jean's choice, though I wish she had not made it. I wish she had called me. I wish I had called her. I'd been intending to this weekend, to see if she wanted to go to a a concert with me. Over the summer, we'd gone to see a couple of movies together—"Iron Man 2" and "The A Team, which we'd both enjoyed tremendously. We both loved Robert Downey, Jr., in t he former and Liam Neeson in the latter, and were laughing at exactly the same inside jokes in "The A-Team." We're probably the only two people on the planet who really liked it. Jean was a lot of fun to go to the movies with because she gave herself over to them whole-heartedly, in the spirit in which they're meant to be watched, the way kids do. We laughed! We cried! We had a great time! I was looking forward to seeing many more movies with her in the future, and getting to know her better. I always expect to get a lot of wear and tear out of my friends, and at 50, they're too young to be dying, especially of despair.

When I saw Jean last summer after I came back from China, she was quite depressed, but struggling valiantly to claw her way up out of that black pit. We met for coffee and I gave her a little jade pendant of Quan Yin, the Chinese Buddha of Compassion, the one that always spoke most to me, because I thought she needed it more than I did. The world is hard on gentle people like Jean, and I hope that pendant gave her a little comfort, insubstantial as it is. One of her last posts on Facebook was a link to raise money for the Muslim cabbie who'd been stabbed by a drunken, bigoted student. She had plenty of compassion of her own, for other people, but there didn't seem to be enough around for her.

I'll miss you, my friend. Whatever comes next, if anything, I hope it brings you peace and happiness. And if there's nothing, at least the pain is done. I really hope you're laughing your ass off somewhere with George Carlin.

Posted at 07:34 PM in Civil Rights, Grief Studies, Life, the Universe, and Everything, Mortality | Permalink | Comments (12)

Year Nine: The Best Thing We Can Do

is go on,
perhaps not just as we were
but remembering
all the fallen
and who they loved,
not just the heroes,
because there are no heroes
without those
in need of rescue,
and all of them
are sacred:
just ordinary people
until that moment.

So much of that
is chance:
Get up ten minutes late
and the maelstrom
passes over—
as though there were blood
on your doorposts—
but wipes out your
job, your company,
your colleagues, strangers,
everyone
more punctual than you.
Where you might have stood
the air fills with the dust
of the dead and destroyed,
crystalline and ash at once,
poisoning the future.

Who you pray to
if  you pray
did not protect you.
The flames that descended
from heaven that day
were not holy, but
made by someone
who just wants to watch
the world burn.