Achtung! Whining ahead. Ridiculous amounts of time have passed since I posted anything anywhere, and that's because this was The Year That Would Not End. Every time I thought I was clear of things and could get back to my own projects, just one more thing cropped up. First it was late papers for grading. Then it was unexpected editing work. Then it was story editing for friends. Then my back and neck went out (and I'm still working with numb and tingling fingers). Then it was catching up with friends I'd neglected all year. The latest obstruction is DeeDee Monster 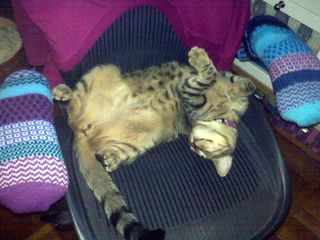 , the cat I'm watching for one of Gretl's friends. I took him on because he was terrorizing her elderly girls and I figured Mab could handle him (and can), but I can't. I've spent the last two months cleaning up after him constantly or chasing him off of things he shouldn't be on, or wrestling stuff away from him, mostly in the middle of the night. He attacks my feet every morning at 5 AM, shovels his litter out of the box on a regular basis, thinks everything in the house is his toy, and has peed on two rugs and broken a tea set (luckily one of the cheap, manufactured ones). It's a good thing he's so cute, because some days, I'm at my wits end with him, and that's mostly because bending over cleaning up after him has not been fun for my back, and I'm not getting much sleep. And it's freakin' hot.

As a result, I'm largely brain dead. No books are getting made because DeeDee is a world-class hinderer and will get into the brushes and paraphernalia. I can barely keep him out of my printer when I print something, and he's already been chewing on my brushes. Very little writing is getting done because my brain is a large, gooey bowl of sludge. As a result, I've been lying on my bed in front of the fan reading mostly junk and working my way through all 9 seasons of CSI, with occasional forays for groceries and post office runs. I've been to watch some movies with friends, but again, nothing brilliant, just summer blockbusters.

I've been working a bit on the poetry collections Helen arranged for me. I like what she's done, a lot, and I've taken most of her editing suggestions, but they all need fleshing out a bit more before any of them can be submitted anywhere. Nothing major, just a half dozen each (rolls eyes). Yeah, I've managed a draft of one, so far. I can hardly string a coherent thought together right now. I've never felt quite this friend before, but I hope it lets up soon.

Nonetheless, I've been thinking about travel and realizing I miss Barcelona and want to go back there again. Not just because it's such a beautiful, welcoming city, but because I enjoyed the solitude and the exploration. I enjoyed distilling my experiences down each day into a blog post and trying to discover what made that city tick, what its energy was. And I still want to get to Italy, maybe to Rome instead of Venice though.

But not this year. This year I need some recuperating. And I need to get rid of this cat.