sing the sun back again

Winter's here. Tonight's the longest night of the year, or today's the shortest day, whichever sounds better to you. Personally, I'm okay with long nights, being a night owl, but I know some people dread this time of year and suffer from the lack of sunlight. I'm not one of them, though I find the older I get, the more disheartening it was to get up before dawn and come home after sunset. I think that had more to do with work being what it was than with lack of sunlight though. And we've been graced with snow this year, lots of it, though not as much as I'd hoped. The Bronx only got 6 of the maximum 27 inches possible in the area, but it's still on the grass and in piles along the edges of the sidewalk. The air is crisp, cold and fresh and it makes me happy. Happily, I have the cold-weather clothing for it.

I've spent the day working on a PowerPoint for class tomorrow, and weaseling out of grading their midterms (three more weeks of classes when we come back in January, so I don't feel too guilty about it). I'm going to Eva's (appropriately enough, even though she's an ecumenical Jew) for Christmas Eve, to watch Babylon 5 and eat bagels and lox with her and Vinnie and Roz. I'm bringing along the infamous chocolate whiskey cake too. Hopefully it won't stick to the pan this time. Maybe I'll get a chance to decorate it too. The pan I make it in is a giant daisy and this cake'd make an awesome black-eyed susan. And that's appropriate for the season too: a Day's Eye cake, i.e., a sun cake.

I've got Loreena McKennit, Clanaad, Paul Machlis, Iron and Wine, Alastair Fraser and various Celts on the CD player. Maybe I'll light some candles tonight, while I'm roasting poor man's winter veggies (spuds, parsnips, turnips) for stew, and have a nice dark beer to celebrate the season. I've still got to make my New Year's card, but that's going to have to wait until break. They might be a bit late this year. Maybe some year I'll get them sent out by the real solstice. In the meanwhile, this (a solstice blessing gakked from one of my LJ/fandom pals) will have to suffice: 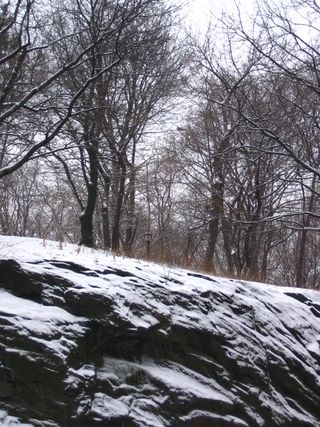 Shed away your tired old coats my darlings.
Shed the tears
that tear you from within.
Like a snake
who has outgrown her skin,
writhe and scrape
until the dull old scales
fall away.

Slough off the remnants
of your worn-out self.
Peel away the layers
that no longer suit you,
that constrict you,
so a shiny,
smooth,
lissome you
emerges.

May all your days be happy ones!