Long time no post here. Or anywhere, for that matter. I've been busier than a one-armed paper hanger and I'm still playing catch-up. My desk and work table—heck, my whole apartment—looks like a disaster area. I have a hundred household chores, grading to do, books to make, projects to attend to, and absolutely no energy whatsoever. It's been a kinda crazy semester. Where to start? Maybe with the new tenant. 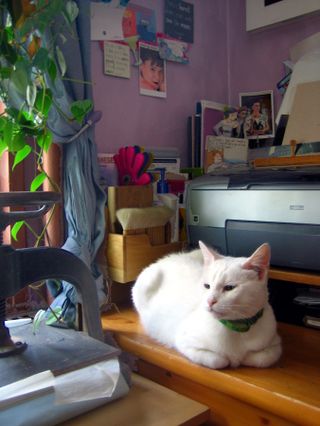 After many long years without a cat, I've acquired a beastie. Or rather, the beastie has acquired me. This is Queen Mab, who was once a lost little street kitty that my friend Gretl (whose pic you can see on the wall there) picked up and took home right before I left for China. She knew just who to throw herself in front of, too. All it took was her rolling over and showing her belly for Gretl to pick her up and bring her home. When I first saw her, Mab (who Gretl called Princess Farhana, after one of her Burlesque buddies) had dark grey stockings, tail, and ears, and we thought she might be part Siamese. She talks and acts like one, but her "points" proved to be just dirt. She's a big marshmallow with green eyes and an attitude. She was lying on Gretl's bathroom floor, purring up a storm at any attention she received and turned out to be a territorial tyrant, driving Gretl's poor, sweet, dim kitties into exile in the bedroom for the duration of her stay. Once I brought her home, it took her all of 15 minutes to adjust to her new abode at my house—and make it hers. Here she is staking claim to my desk. She's playful and funny and very good natured. She likes people, which is a real switch from the last bitch-kitty I had, but she's a one-cat-per-household cat. And she talks. I kept thinking about her the whole time I was in China and fighting the idea of bringing her home. After all, having a kitty puts the kibosh on most serious travel, doesn't it? But like with the Borg, resistance is futile. Cats pick you. You don't pick them. So now my house is covered in cat hair. And white, you know, goes with nothing I own. Nothing. I don't care. She's put punctures in my leather sofa and barfed on my rug more times than I can count already, and cost me $1,000 last weekend to get her butt unplugged. I don't care. It's great to have a beastie in the house again.

I'm back teaching at CNR again, but I also, thanks to a renewed connection, picked up a couple of classes at the College of Staten Island. This is both good and bad. Good because it's a CUNY job and that pays well, plus after three semesters I get benefits. Bad because it's in Staten Island and the first seven weeks were a brutal schedule: up at 6 AM, catch the subway at 6:45 to the express bus at 7:54, reach CSI at 9 AM; office hours from 9-10 (yes, I even get paid for those!); first class from 10:10-1:10, second class from 1:30-4 (no break); run for the ferry shuttle at 4:05, grab the 4:30 ferry back to lower Manhattan and catch the #5 train to the Bronx to teach another 2.5-hour class there, and catch the bus back home, where I arrive at about 9:30. Not much time to eat, and 8.5 hours of being "on," which, believe me, is not the same as sitting in a cube for that length of time. By the time I got back, I was totally knackered. Then I had a 10 AM class at CNR both Weds. and Thursday. After next week, I'll be down to three classes total from 6. I'm still doing the AM class at CSI, but I've only got one more evening class at CNR and then just the Thursday morning classes, so it's not as bad now, but I just don't have the stamina for that anymore. Not sure I ever did.

Not surprisingly, I got sick as a dog about two weeks ago. Not the flu, thankfully, but the usual awful case of bronchitis I get when I'm run down. I'm still fighting it off, but the cough is going away and the stuff I'm hacking up is no longer a disgusting color and doesn't taste like my lungs are rotting from the inside out. Last night I got the first full, cough-free night of sleep I've had in a couple of weeks. Of course, the cat woke me up at 7:30 demanding attention, food, and entertainment. She's like that. Me, me, me.

So with six classes to teach, that's about all I've been doing. Helen was here in October, and I saw Jen briefly when she whizzed through town for the New School's science movie festival. She and I and Helen went to dinner at Spice Market, a place I've been dying to try (well worth the money) and then drinks with Gretl afterwards, so I'm working Helen into my circle of friends here too.

I've been getting some good poems out of the ferry commute, I think, and teaching, as always is something I find stimulating. The classes at CSI were tough, not because of the subject matter (basic computer skills), but the audience. Such a huge difference between the Staten Island "kids" who really are, and the ones at CNR, who, even when they're young, have really had to grow up fast and don't take anything about their education for granted, even when they don't quite know how to be students. The ones at CNR have so many obstacles to overcome and the ones at CSI seem so much more sheltered and take so much for granted that it's frustrating when they goof off and talk over me. Plus I'm competing with the internet because the classes are in the computer lab and they can't stay off fucking Facebook.

I missed Julie's non-Thanksgiving Thanksgiving, even though she rescheduled it around me, so I'm getting no Thanksgiving at all this year, which feels a little weird, and that it feels weird is weird in itself because I've never really celebrated the holiday. For a few years when I was a kid, we went down to Uncle Dave's & Aunt Eltha's for an Allam gathering, but that didn't last long because there were so many of us. In college, I rarely went home for it, usually going to the Uncle Ralph's & Aunt Lucy's for dinner. In grad school, I sometimes had dinner with friends. When I moved to New York, Jen and I started having our own un-Thanksgiving: movies and Chinese food. That lasted until she got married and moved to LA. Now I haven't done much of anything, and this year, I'm sick, so I'm sitting here whining about not celebrating a holiday I never celebrated.

It's actually a holiday I like, and never really saw the harm in. It's not religious, it's not especially patriotic, it's more about what Christmas used to be: family and gratitude. I understand that there's also the whole PC suppression of native culture thing wound up in it too that should make me vaguely guilty, but I somehow can't see it that way, either. I think the original celebration was as much about survival and the attempt at sharing the land (which sadly failed) and was turned into the national conquering myth later. We can't imagine the kind of hand-to-mouth existence new settlers had in an unfamiliar land, where a bad harvest would leave them like the Roanoke Colony. It's essentially a harvest festival, something people have celebrated since we've been planting crops. It's hard not to be thankful for a good harvest when your life depends on it, and I don't really see any reason not to express that thanks. I like it because it's not a holiday that involves presents. It's about food, family, friends, and gratitude.

But I was never allowed to say "Happy Thanksgiving" when I was a JW. That was somehow giving glory to some other god, though I never really understood why. I understood why we didn't celebrate Halloween, or Christmas or Easter, because they all had roots in pagan celebrations. But somehow being thankful for food and survival didn't seem, well, pagan. It just seemed grateful and human. I like what Michael Ruhlman wrote about it today: "Thanksgiving should be about being with people we care about, about paying attention to what we have so that we don't waste it, so that we make more of it, so that everyone has it."

So now that I no longer identify as a JW, I think it might be a holiday I invest in, like New Year's. I doubt I'll ever celebrate Christmas or Easter as they never had and and don't now have any meaning for me, and Halloween seems just like silly fun. But Thanksgiving I could get behind. Next year, maybe I'll have dinner here. I'm certainly grateful for the friends who form my family of choice, for the good food I have access to here in the city, for learning to cook, for the chance to do it for my friends and send them home with leftovers. I'm happy to share what I have and can do. I'm grateful to the small farmers who invest in old-fashioned organics and free-range food and haul it to the greenmarket every week. I'm grateful I have so many friends to share it with. I'm grateful I have a job (even if I have too many of them), so I can afford to buy good food and share what I've got with others. I'm grateful for my finicky cat, who doesn't really appreciate how spoiled she is.

Posted at 12:25 PM in Dogma, Happiness Project, Life, the Universe, and Everything, Religion | Permalink | Comments (0)