I've been saving the best for last, not only because that's when it happened, but because it's a good place to sum up. I meant to get to it earlier, but my back has been out and I've been more or less flat on it when I'm not going to the chiropractor or getting a massage. It's also been unspeakably hot here in NYC (I miss my Harbin AC!), which never makes me happy. And the jet lag has been, in a word, awful: in bed at 9:30, up at 5:30. Ugh.

But all that inactivity has given me time to digest and distill the trip, and other people's questions have made me think about the highlights. To be honest, I have to say that China is still not my number one choice of places to go, but in all fairness, I saw a very small and untouristy part of the country. In many ways that's good: I got to meet people one normally wouldn't on a vacation and see more of the "real" China than tourists usually do. In another way, I feel a bit cheated; the area we were in was heavily Russian/Western influenced and not, I think, "typical" if there can be such a thing in a country as big as China. It's like coming to, say, Indianapolis and judging all of the US by it. Except that China has this very old culture, and much of Harbin felt, in comparison, quite new, even the parts that date back to the 19th Century. Because in 3,000 years of history, that's pretty darn new.

One of the things I'm coming to realize now, looking back, is how entrenched that culture is. The sense of continuity is like oil on water. Sure there have been wars, but they seem to have the air (and this just may be my ignorance) of wars of succession, rather than wars of revolution. Even Mao, whose ideas truly were revolutionary, didn't completely succeed in upending thousands of years of culture. The Imperial bureaucracy is still there; only the name has really changed. If there's any one reason for that (and there never is), I think it boils down to the contrast between the western desire for progress and change and the Chinese respect for the past and tradition. I think that reverence for the past made China lose some of the momentum it once had in science and technology. Turning inward will do that. But what I didn't see in physical culture was more than made up for by the wonderful people I met, something I would not have been able to do on a regular tourist jaunt. China's people, if the ones I met are any indication, are its real treasure.

And that reverence for the past still produces some astonishing contemporary art, which I found out when Li Liqing took me to the Art and Culture center not far from campus. This was a kind of mini-mall for artists, two stories tall, with small studios/galleries for individual artists. The first floor was mostly jade, furniture, and ceramics (with a pet store and flower shop thrown in for good measure, probably to feed all the koi in the various displays), and the top floor was mostly painters and calligraphers. Not all the art was Chinese style; there were a number of oil painters doing landscapes in the western style as well. 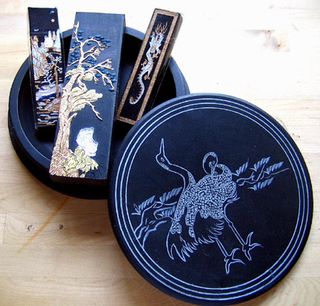 I'd been asking around at dinner to see if anyone knew where to buy calligraphy supplies, like ink sticks and ink grinding stones. It turned out that Li Liqing's niece was taking calligraphy lessons from a woman named Teacher Tang. She very kindly sold me some beautiful, handmade paper (100 large sheets for about $30!). Teacher Tang doesn't speak English but understood it well enough to realize that I recognized good paper and knew a little bit about calligraphy and the tools. Enthusiasm translates easily and she could tell I loved the paper. Teacher Tang then walked me over to another store where they sold me a quite nice ink stone with cranes carved on the lid and three ink sticks, all for about $45.

The ink sticks are works of art in themselves, and the largest one, which cost me about $10 (the smaller ones were about $1.50), has the most beautiful pine fragrance. Teacher Tang walked me through the grinding process and showed me how to hold the brush and very kindly offered to tutor me via the Chinese IM qq.com. I may take her up on it; or if I go back next year, just sign up for lessons while I'm there.

Li Liqing and I walked around the rest of the mall a little bit before we had to rush back to classes. The standout for me was a man doing ink paintings of wild horses. The brush strokes were extremely economical in the way Chinese ink paintings are, but I've never seen anything look as lively as his work did. I have a weakness for Chinese and Japanese horses anyway, and these left me gasping. I never got a chance to price them, but I suspect they were waaaaaay out of my league. Maybe next year.

Just before we came home, I asked Li Liqing to take me back to the calligraphy shop because I wasn't sure I could find it again, and because I needed an interpreter. Jan came along for the ride too, and we wandered around the showroom a bit more and bought some jade. We went back to Teacher Tang, and discovered Li Liqing's niece having a lesson. She's eight and was shy and stubbornly refused to "perform" (not that I blame her a bit. She did say hello in English though and went right back to her work. 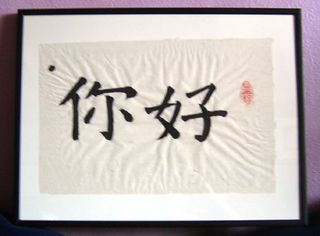 I'd decided to buy a piece of calligraphy and watched a demo by one man whose style is that interesting messy freehand but his attitude turned me off. Most of the other stores were closed for the day (it was late on Friday) so we ended up back at Teacher Tang's where Li Liqing's niece had made a little piece of calligraphy for both Jan and I that said "Ni Hao" (hello), which Teacher Tang stamped with her own chop.(It's still wrinkly because I didn't have it dry mounted.)

It turns out Teacher Tang's father, who is now 80, is one of the top three calligraphers in Harbin and has collectors all over the world. She was happy to bring some of it out and show me. The first piece, translated roughly, said "books are treasure mountains" which could not have been more perfect for me. I was practically jumping up and down with excitement and made it clear that that was the one I wanted. It's beautiful calligraphy, crisp without being stiff, done on gold-speckled paper. (It's off for framing, or I'd post a picture.) I was so excited and pleased that Teacher Tang started to tear up and knocked 200 yuan off the price. Li Liqing kept saying that Teacher Tang was so touched by how much I appreciated Chinese culture, which is something I've heard again and again, whenever I expressed any interest in any aspect of Chinese art or history. Teacher Tang and I hugged each other and professed our respect and admiration for each other and I went off to dinner with Li Liqing. 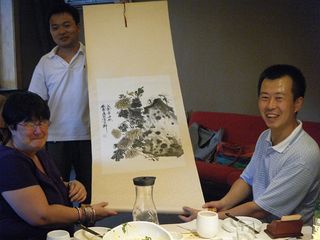 That's where things got really amazing. I had my loot with me in a lovely green box and Jan and I were talking to the rest of Class D about our art purchases when Lin Tao (thanks to Jan for reminding me of his name) asked to see it. I pulled it out and he looked a little critical, asked what I paid for it (not considered rude in China) and then said he thought I paid too much (which is a pretty common conclusion, I suspect, when Westerners buy stuff in China). My response was that it didn't matter what it was actually worth because I loved it. That led to a longish discussion about the value of art and beautiful things and then art in general. At some point in that discussion, Lin Tao says, "I had no idea you had such respect for Chinese culture. I have something you should have." And he leaves the restaurant, goes home, and comes back about 20 minutes later with a six-foot long scroll of yellow silk, with a beautiful painting of chrysanthemums and bamboo and rock mounted on it. Lin Tao's uncle had done it and insisted that I should have it. Here's Marcy's pic of me all choked up, accepting my marvelous gift from Lin Tao, who's opposite me (that's Chang Juntao holding the top).

That's one of the top ten presents I've ever been given, from someone who was nearly a stranger. And that's pretty representative of the graciousness and kindness of the people I met, from new freshmen, to professors, administrators and people on the streets of Harbin. Damn, I'm choking up now, just thinking about it.

About a dozen people turned out on Thursday to see us off at 6 AM and Shuai Yong shepherded Elliott and I to the gate with several other HIT faculty members. We were asked to autograph four shirts for them, which I thought was hilarious, and given a CD with copies of the pics all the HIT faculty took when we were together. This was the note Shuai Yong attached to it:

Time flies.
I hope it gave the beautiful recollection to you in Harbin city.
I wish the past 3 weeks is just the beginning of our friendship. I miss those days very much. If God can give me another chance, I will say 3 words to everyone-I love you. If you have to give a time limit to this love, I hope it is 10 thousand years.
Let's keep in touch.

I would like to go back again, just to see the friends I made there, if I can't see more of the country. I would like to go back again in 10 years, in 20 years, and see what China has become. We can learn so much from each other about living and how to do things. I hope the Chinese government gets the hell out of the way of its own people. China will be a truly great nation then.

If you're interested, here's a bibliography of the books about China that I've been reading over the last couple of months:

Hessler, Peter. Oracle Bones: A Journey Through Time in China. New York: Harper Perennial, 2006. Fascinating and eminently readable, tying history and the present together with an artful structure and beautiful prose.

Yiwu, Liao. The Corpse Walker: Real-Life Stories. China from the Bottom Up. New York: Pantheon Books, 2002. China's underclass, interviewed and described by a poet and writer imprisoned and marginalized for his outspokenness. Who and what you don't see on a tour.