As I've said earlier, Harbin is filled with construction in China's new, booming economy, which seems not much slowed by the rest of the world's economic woes. HIT is gearing up for it's 90th anniversary next year and many of the buildings are getting new facades and staircases, or being gutted and remodeled. Several new ones are going up as well. Yesterday, the main gate to the campus was closed off and the sign facing the road has been demolished. The square looks like it's going to get new paving. I think by this time next year it will be a sparkling new campus. 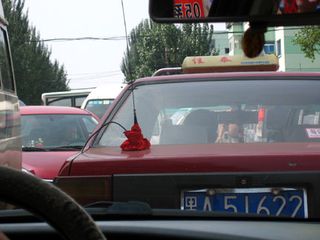 The rest of the city is keeping up too. New structures covered in scaffolding and green tarps are everywhere. The city is also building a new subway that will have about a dozen stations. As a result, roads are closed everywhere, making traffic even more nightmarish than it might be in a quickly growing city like this. Case in point: A couple of our students took Marcy and I to a store called Metro across town. It's not that far away, but it took us quite a long time to get there because we got stuck in what I'll politely call a traffic jam but what was more like a small clusterfuck. These seem to happen fairly often here, especially on the smaller side roads. Part of it is the narrowness of side roads and part of it is the driving habits of the citizens. That double line down the middle of the road that means traffic on the other side goes in the opposite direction and you shouldn't cross it except to turn left? Just a suggestion. Somebody in front of you turning left while you want to turn right? Pass them on the left, if necessary, even if it's several cars. Street blocked? Try the sidewalk and let the pedestrians look out for themselves. Stoplights? Only at truly major intersections. Right of way? Who's got the fastest car? And yet, there are precious few accidents because while Harbin drivers are aggressive and unruly, they are, in a strange way, polite and cautious. When driving anywhere is a constant game of chicken, a little eye contact goes a long way. That bus will barrel down the road at you, but if it comes right down to inches and feet, it'll slow to let you in, or stop to keep from running you over, if you're on foot. And most people don't drive that fast, except on the straightaways. Even bicycles ride the expressway. People sit under the overpass on the side of the road and play board games. 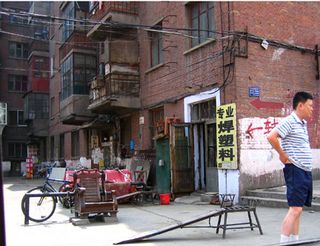 As we were looking for a taxi this morning, a woman on a scooter with her young son on the back was nearly sideswiped by a minivan, mostly because she wasn't really paying attention and had decided to do a U-turn in the middle of the street. The van barely brushed her, then stopped, saw she was all right, and went on. It could have been so much worse because neither of the scooter riders were wearing helmets. No one seems to here. That was just an omen of things to come. Before the clusterfuck traffic jam, our taxi driver took us through more muddy back streets than I guessed existed in Harbin, which was great because you get to see bits of peoples lives that you wouldn't, otherwise. As we were waiting to see how we'd get out of our jam, our driver got out of the car to take a look and we found ourselves opposite a little courtyard workshop and a stepped sidewalk. After a few moments, a minivan wheeled around us, up the steps and down the sidewalk, scattering pedestrians, into the main road. A couple of minutes later, a motorcycle came by going the opposite way, right beside a pedestrian. Behind us, our driver pointed out, was a long, black wedding limo, with a cascade of flowers on the hood. 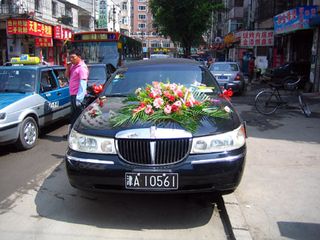 It cleared up after about ten minutes, just after Marcy described how this situation would be resolved in America, with the cops coming to direct traffic. Sure enough, someone was directing traffic, but it was someone who'd gotten sick of waiting and gotten out of his car to do it. And unlike New York, there was little horn-honking and lots of patience. I think the drivers here are not so much aggressive as self-assured and cooperative. It's a chaotic system in the sense that it has an unseen order. And we didn't even pay for the time we'd lost sitting in traffic, just the distance we'd traveled. So, we arrived at the Metro store, which is like Costco or Sam's Club in size: acres of warehouse holding imported western food (what we were there for, so Marcy could show her class what some of the things on the menus were), clothing, kitchen implements and appliances, produce and meat, cleaning supplies, toiletries, you name it. We managed somehow to blow 870rmb between us, and hauled it home in a couple of huge reusable grocery bags, one of which I'm bringing home with me. We'll start cooking tomorrow night: coleslaw, potato salad, grilled cheese, risotto, BLTs, brownies, maybe a quiche, and pancakes. Rob, you and Marcy need to have a pie crust bake off some time, if you haven't already. I'm leaving that to her. During our wander through the wonderland of the Metro Store, I ran across packages of spiced donkey meat that I had to take pictures of. Then at lunch, we ended up eating some in dumplings, at a very nice dumpling place next door to the KFC just outside campus. Yes, the Kentucky Fried Chicken restaurant. Sheesh. The donkey meat was so finely ground I couldn't really tell the flavor, but it was a little . . . gritty. And no wonder, if they're grinding up those sorry beasts I see pulling carts here. The silk worms still win top place in Weird Things I Have Eaten, I think, though I did see dried sea cucumbers, in a presentation box no less. Don't think I'll be trying those.

Mahjong lessons tomorrow. I've been asking around for where to buy ink sticks and ink stones and paper, but no luck so far. One of the faculty has a niece who is learning calligraphy, so she might know. I've decided I'd like to come home with one calligraphy scroll and a nice piece of pottery or china. No idea what to get for friends. This isn't a tourist kind of town much, but I think I'll have to go down to Central Street and shop a bit.

Oh, and the apartment blocks I've been saying look so shabby on the outside? Marcy was in one recently and they're apparently quite nice, all modernized and immaculate. Tenement-like on the outside, high tech on the inside. So much for appearances.