Got off the campus today, after a couple of moderately successful classes. The last one, where we talked about Newton, automation, and the British Royal Mint while Newton was in charge of it worked well, especially the second half when I let them ask any questions they wanted, about science or anything else. I tried a different cafeteria on my own for lunch and founds some good fried rice and ran into a guy from Hong Kong who wants me to email him "English Expressions." I smell green card hunter on this one. He's a bit shady. Even the cleaning ladies (fuiyan?) were suspicious of him.

But it's the afternoon that was most interesting. Again, I'm absolutely knackered, and that's because I walked around a lot of Harbin, from the park (name to come later) to the central shopping district and over to the square where Santa Sophia is. The park was gorgeous, with amusement rides as well as carefully tended flower beds and a beautiful pagoda we took shelter under when it started to rain. There were black swans in the river too. I'll have more pictures and more stories, but my camera was also hijacked during the trip, so about half of the pictures were of me and the faculty who graciously took Susan and I around. They are lovely people, but they want pictures of themselves and you on your camera, everywhere, so I didn't get as many as I wanted to, though I did get a couple of goodies. It's hard to take good photos when you're in a group anyway, because they take time to set up and frame. 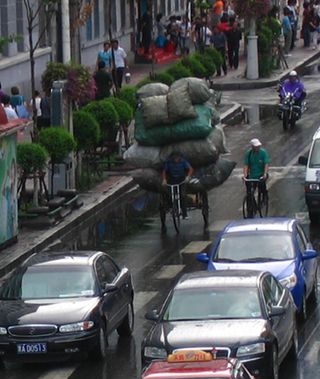 Anyway, Harbin looks far more European than I had expected in many ways, and has earned its moniker of the Oriental Paris. There are many western-style buildings cheek by jowl with the pervasive, dense Chinese architecture in the brutalist style. Parts of it are very sophisticated in all the expected western ways, and then sabotaged by poor and smelly drainage and badly maintained sidewalks, and traffic that make New York look sedate. Other parts of it are National Geographic classics: dense, wet, muddy, crowded with vendors and unfamiliar food. I got a whiff of durian in its native ripe state down one sidestreet though I'd still like to taste it fresh, and not shipped overseas thousands of miles. And this meshes with a question one of my students asked about what makes a developed country and why Americans see China as less devoloped than us. In many ways, it's pretty arrogant to call China an undeveloped or even semi-developed country; their civilization is far older than ours and has experimented with many more types of social organization than we have. We base our development criteria largely on our own bias of consumer culture and a fair sophisiticated (or decadant, take your pick) aesthetic. You can't even say our economy is that much better than theirs now.

My favorite picture of the day is this poor guy peddling his working bike loaded with plastic bottles down one of Harbin's main drags. Oy. There are pedicabs everywhere, along with the working trikes, and on the way back to campus, trotting along the expressway was a donkey cart.  0_o

The culmination of PeeWee's Big Adventure was more dumplings, really great soups, and pig skin. Yes, pig skin. Not footballs or pork rinds, either. This was boiled, pickled, and sliced and had the texture of aspic, and wasn't particularly tasty. Glad I tried it, just to say I have, but it's not a favorite.

We're off to the zoo this Friday, which should be fun. More as I have conscious brain cells to write.

That park? It's called Stalin Park. :)