Proposition 8 and the discriminatory nature of marriage

There are protests nationwide today against California's passage of their Proposition 8, banning gay marriage. Instead of marching, I'm blogging (because it's pouring rain here). I am repeatedly boggled by the need of human beings to deny others their humanity, when those Others have done nothing to directly harm those who would classify them as subhuman. This was the cornerstone of slavery in this country (slaves counted as only 3/5 of a person); of denying both African Americans and women voting privileges; and now of denying gays the right to marry. In a word (or acronym): WTF? 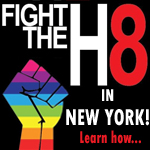 The argument that two people of the same sex marrying somehow harms the "sanctity of marriage" between two people of the opposite sex is completely illogical, as Spock might say. I'd like to see a demonstration of what this harm is. Does it prevent opposite sex couples from obtaining marriage licenses? No. Does it prevent opposite sex couples from obtaining housing? No. Does it hinder them in exercising any of their already granted rights? No. It merely offends some of them. Too bad. I'm offended by bigoted people marrying and propagating their bigotry by teaching it to their children, but I'm not about to deny them the right to do so. Human rights don't work that way. Either we all get them, or none of us get them.

The idea that the marriage of two people of the same sex is somehow an aberration is also just patently false. Tufts University Historian Gary Leupp has a great capsulized refutation of this idea in an open letter he wrote to Governor Mitt Romney. Here's a little sample of it, with a bibliography:

[I]f you want to talk about homosexual unions in recorded history you should do some study first. First I recommend you read John Boswell's fine book Christianity, Social Tolerance, and Homosexuality (University of Chicago Press, 1980), in which he documents legally recognized homosexual marriage in ancient Rome extending into the Christian period, and his Same-Sex Unions in Premodern Europe (Villard Books, 1994), in which he discusses Church-blessed same-sex unions and even an ancient Christian same-sex nuptial liturgy. Then check out my Male Colors: The Construction of Homosexuality in Tokugawa Japan (University of California Press, 1995) in which I describe the "brotherhood-bonds" between samurai males, involving written contracts and sometimes severe punishments for infidelity, in the seventeenth and eighteenth centuries.  Check out the literature on the Azande of the southern Sudan, where for centuries warriors bonded, in all legitimacy, with "boy-wives." Or read Marjorie Topley's study of lesbian marriages in Guangdong, China into the early twentieth century. Check out Yale law professor William Eskridge's The Case for Same-Sex Marriage (1996), and other of this scholar's works, replete with many historical examples.

The truth is, marriage was not even considered a sacrament of the Church (sanctified) until the 12th century—more than 1100 years after the Church's beginnings. Makes you think it wasn't a big priority, doesn't it? In truth, it wasn't. Marriage was a social contract and often a way of keeping lands and property together in one family. It wasn't even specifically about love until much later, and only incidentally about procreation. Celibacy and singleness were the preferred states to the early Church, as Jesuit priest and Boston College historian Stephen Schloesser points out in another open letter, this one to Senator Marian Walsh:

In the twelfth century, the idea of marriage as a "sacrament"—i.e., as something fundamentally regulated by the Church—was established along with priestly celibacy and primogeniture. The simultaneous appearance of these practices shows the way in which the preservation of property suddenly became an issue of great anxiety: celibacy prevented church property from passing on to priests' wives and children; primogeniture insured that property remain intact as it passed on to only the eldest son; and Church surveillance of marriages made sure that an authority larger than, say, the most powerful warrior / aristocratic families on the block, was overseeing the passing on of dowries—e.g., Eleanor's region of the Aquitaine. Women became the means of medieval corporate mergers: families consolidated power and property, both by means of dowries as well as by being the producers of male heirs.

Marriage was only sanctified by the church when they stood to lose enormous amounts of property: a strictly commercial decision. The contemporary options are quite different. Only a church can confer sanctity and only a church can take it away. Unless you yourself violate the moral principles attached to the religious institution that sanctified your marriage, no one else's marriage can take that away. And if the civil right to marry in front of a justice of the peace rather than a priest or other religious official creates a legitimate marriage in the eyes of the state, why doesn't that de-sanctify holy matrimony? There are already two competing available options for marriage. Neither cancels the other out.

The objections to gay marriage aren't, by and large, rational; they're emotional. But I also suspect part of the objection is that marriage confers so many privileges and perks: tax breaks, health care coverage, legal status, rights to joint income, child custody, inheritance, the unquestioned ability to act as medical proxy for your partner. And it's these, I suspect, that the anti-gay-marriage crowd wish to preserve for themselves. Marriage in this country is a privileged state. Ask any single person about the relative tax burdens we pay as opposed to married folks. Ask any woman how differently she is suddenly treated as a wife or even a prospective bride.

When my friend MG fell down the stairs and gave herself a concussion, her partner of 6 years was not allowed in to see her because she was not "family." For many LGBT folks, this is the most terrifying and unjust part of not having the rights and protections of marriage available to them. Imagine the train-wreck of complications that arise when one partner is injured and his or her parents who do not acknowledge or like the other partner, or the fact that their child is in a same-sex relationship, struggle over who has the right to make decisions about the injured partner's care? In a legal marriage, the spouse has pre-eminent rights, as Terry Schiavo's case showed. And what happens when the biological parent in a same-sex relationship dies? What rights does the non-biological parent have? Virtually none.

This is equal how?

It's not, obviously. It's like saying African-Americans are only 3/5ths of a person, or that women are not capable of carrying out the duties of citizenship merely because of their gender. The denial of the right to marry is based on nothing but the idea that gay people are not really people because of their sexual orientation. We've already decided that kind of thinking is stupid and wrong. We've fought this battle already. Separate-but-equal is untenable and unconstitutional; how can outright denial be any better? This inequality needs to go, too.

If these "traditional marriage" folks want to get really traditional, they would practice polygamy as people did in Biblical times.

I find it ironic that these folks get away with using the "well, polygamy would be next" argument against same-sex marriage. They know not of what they speak.

Not to mention a brother "inheriting" his dead brother's wife. I'm not big on that one, myself.

That extrapolation to polygamy is just the "gateway drug" argument in new clothing. The truth is, people are going to do what they want to do in a society where one's life isn't ruined by someone else's opinion of you. Since it's usually some uptight, no-fun-allowed type who wants to make and impose those social rules, I'm all for ignoring them.