Laughing in the Museum: Art and Criticism

A while back, I went to see the mammoth Turner exhibit at the Metropolitan Museum of Art, one of my favorites in the city and one of my favorite painters. The last time I saw any Turners was at the Tate Gallery in London (now the Tate Britain; the Tate Modern did not yet exist then), a million years ago where I was completely flabbergasted by them and the Pre-Raphaelites. I met a friend I hadn't seen in several years at the Met and we had a lot of catching up and yakking to do, but still managed to spend 4 hours wandering amongst the the jaw-dropping depictions of sky and water, encompassing selections from his entire career. The man was incredibly prolific and churned out literally hundreds of oil paintings, not to mentions his watercolors and drawings, so even a selection is a lot of art to walk through. The friend I was with is an amateur artist herself, currently taking classes at the Getty and elsewhere, and turning out some very competent stuff, so we were both in art appreciation mode, despite our animated conversation.

The Turners make me extraordinarily happy. His palette is generally the cool blues and greens of daylit ocean or warm and bright sunset colors. Nobody paints water and sky like Turner did and reproductions just can't capture it.

To see what I mean, look at these two web images of one of his most famous paintings, The Fighting Temeraire Tugged to Her Last Berth to be Broken Up: This one is from Wikipedia, this one from the WebMuseum, Paris. I love the way the ship in this painting is already a pale ghost, just tinged with bloody sunset as though it were the stains of her history. You see the Temeraire bow-on without sails but still huge and daunting and majestic. Except she's bleached bone-white, scoured of paint, and looks skeletal without her sails. But the Wikipedia repro looks garish and you lose the subtle contrast of the vibrant, living ships under way in the background.

Turner painted a lot of shipwrecks, which also fascinate me as much as they seemed to fascinate him, so between seeing all this marvelous art about water and sailing ships, and a pal I hadn't seen in ages, and an intense conversation, I was a pretty happy camper. I laugh a lot when I'm happy, and I have a big voice. In the Met's unrelenting stone architecture, it echoes a bit, and almost inevitably, I got shushed.

I do not understand this behavior in a museum. Despite the word's etymology, museums are not libraries where scholarly work or quiet studying or relaxing reading are going on, where people need to concentrate, at least not in the galleries. They're not movie theaters or performances where your conversation can spoil or obscure the action on the screen or stage. There are no signs that say "Quiet Please." And yet people creep around art like they're in the Holy of Holies and their joy might offend The Gods of Art somehow.

Lighten up, people. It's just art.

And at the same time, it's Art. It's there to make you happy. That's only one of its functions, but it's not a trivial one, and the paintings won't crack or crumple if you laugh or otherwise express that joy. Don't try to pretend you're studying, either, and need quiet to concentrate. My guess is that most of you people looking so intently at the brush strokes are not painters interested in Turner's technique. No, you're pretentious gits who don't understanding painting technique to begin with and don't know how to look at paintings, but want to appear in the know. Get a grip. It's not the technique that's enlightening, it's what the painting's about. Stand back, see the whole picture, look at the painter's use of color, the composition, the sense of balance, how the scene is framed. Otherwise, what are you going to see in this painting: 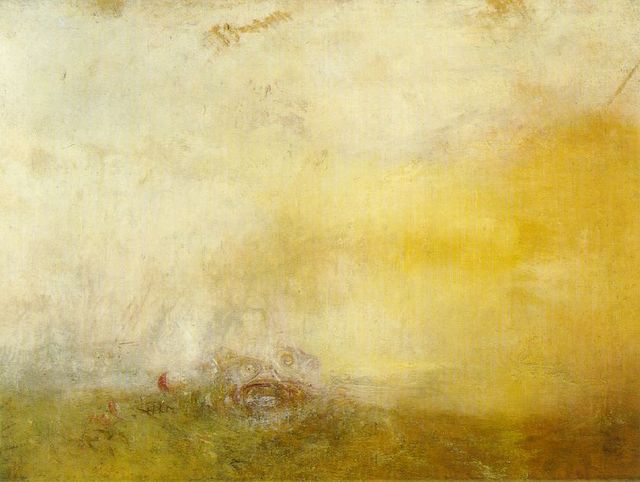 This painting in particular made me laugh. It's such a great joke and an anodyne to his earlier, deeply grim Slavers throwing overboard the Dead and Dying - Typhoon coming on from 1840, in the same way Peace - Burial at Sea (1842) is, though it's filled with smoke. That divine shaft of light spotlighting the body being lowered into the ocean for its final rest changes the entire mood of the painting, makes it both solemn and joyous.

Why does fine art make viewers so pretentious? Because art critics have convinced them they can't understand it without an intermediary, someone to interpret the artist's intentions, decode their language, explain the trajectory of their oeuvre. Nonsense. All that jargon? Totally unnecessary. As Qui-Gon Jinn tells Anakin before the podrace in The Phantom Menace, "Trust your feelings." Art is complex and has a number of layers of meaning, but the beauty of art is that those meanings are always accessible, and they change as we do, often rising unexpectedly to the surface. When you're a kid, it's just a pretty picture, or a great movie, or a page-turning story. We may not even know why that piece of art moves us at this stage. Once you know some history, have lived a little, seen a bit of the world, had your feet kicked out from under you and gotten back up, you can look at the same piece of art, movie, or story and see another layer of meaning beneath the surface. Depending on where your life is when you experience that work, it's going to speak to you or not. You may hate it on first or second viewing and fall deeply in love the third time around, or vice versa.

For example, in my early feminist days, I was deeply attached to Georgia O'Keefe's abstract paintings, the ones most often likened to women's genitalia. Because I was young and had seen more than my share of phallic symbols, but a real dearth of yoni symbols, they seemed radical and exciting. The Dinner Party did too, but only it has retained its power to move me. Another example: I used to really detest Cubism because it seemed to just needlessly distort the human figure. Then I had another artist explain to me that Picasso and other Cubists were actually playing with representing the new dimensions recently discovered by physics (not a popular interpretation, I have to say). Suddenly, the whole school made sense and I began to see it completely differently, and without hostility. It's still not my favorite school, but I get it now. But as a result, I like it a lot more.

I've been thinking a lot about this subject the last couple of days because I've just been drafted to teach a litcrit course at CNR this fall, and I generally loathe litcrit. It's not a theory course though, thank goodness, so much as it is a way of looking at literature and writing about it, developing communication and analytical skills. Which is the core of good criticism, really.

Criticism is useful only if it unfolds those various meanings, as the best criticism does: elucidation rather than the current obfuscation often present in its jargon. Even then, it is not a definitive answer to what art means. There is no definitive answer. (Wannabe One to Neo in The Matrix: "There is no spoon.") Instead, there is the artist's intention, which only the artist can really know; there's the artist's subconscious intention, which sometimes they don't recognize until after the work is done, if ever; there's the cultural context; there're other artistic and personal influences; there are in-jokes made by the artist; there are the artist's personal hobbyhorses; and there is, finally, the viewer's perception, colored by their own life, knowledge, and experiences. A good critic takes all these factors into account when talking about a work of art, without projecting his/her own hobbyhorses onto the artist and/or the work.

Easier said than done. The fact that's gotten lost in a lot of art criticism (and literary criticism, too) is that criticism is not an art form in itself. It is a forensic tool, like a scalpel or a scanning electron microscope. That tool is used to give us a common vocabulary to talk about the human experience as seen through art: archetype, theme, pathos, ethos, intent, history, and yes, technique. Critics are not the high priests in the Temple of Art. They are not the exclusive interpretors of the scripture of art. Museums are not the Holy of Holies. Art is not a Solemn Rite. It's a human activity. Anyone who is human can understand it. And if doing so brings you joy, go ahead and laugh. Out loud. Right there in the museum.