The Truth Will Set You Free

This move has been in the making for years, perhaps decades, and now that I've finally made it, all the thoughts and ideas and accumulating evidence that have been percolating in my head are bubbling to the surface, jostling for position. Now that the dam has burst, I literally don't know where to start. I'm generally an orderly sort of person, especially in my writing, so this chaos in my head is disturbing and irritating. Until I realize what it really is:

Now that I've publicly stepped away from such a closed, restrictive community I feel I can be more authentically myself. I don't have to worry about hiding my heretical opinions, my doubts, my disagreements, my hobbies, my personal beliefs. For someone who values free thought and free speech this is a huge relief. Plus, I'm a lousy liar.

I was always told I wasn't missing anything in "the world," and that was true to a large extent. The things that make most people leave—sex, drugs, and rock 'n' roll—were never issues for me. My temptation was knowledge and the need to think for myself. The more I had of education, the more dangerous I realized it was, especially the good liberal arts kind I acquired. I'd already been taught at home to question everything (my family were great debaters) so it was only natural that college would hone those skills.

While knowledge isn't at all incompatible with faith, it is incompatible with dogma. (Remember that bumper sticker: "My karma just ran over your dogma"? I loved that.) Dogma doesn't stand up well to the two-year-old's interrogation, "But why?" Dogma, by nature, just is. Every discipline has its own dogma, its own unexplained given that must always be taken at face value and factored into any situation—in other words, taken on faith. (The definition of religious faith is "the assured expectation of things hoped for, the evident demonstration of realities though not beheld." [Hebrews 11:1] It applies equally well to other kinds of faith.). In physics, gravity is the unexplained given. In litcrit, it's the existence of the text as an artificial construct. In biology, it's evolution. In religion, fundamentalist ones especially, it's primarily the infallibility of the Bible.

One thing I came to love about science is that it's always asking questions. And that even the cranks and crackheads get taken seriously with enough evidence. I remember looking at a globe in first grade and thinking that, "gee, the coasts of South America and Africa look like puzzle pieces." In the 1960's, when I was in grade school, that was a heretical idea in science, though it had been around as long as since the late 19th century. I remember very clearly when I first learned about plate tectonics and continental drift. It literally rocked my world.

It was exciting because I'd had the same thought, independently, and it turned out not to be stupid or childish after all. It opened up vast possibilities of history and biology. And it contradicted what I'd been taught in church: that the earth was immutable, unchanging, created as it was today. The theory of evolution did much the same thing.

When I was a kid, the endpapers of my Bible had maps of the Holy Land with people and dinosaurs on it. Like most kids I went through a period when I was obsessed with dinosaurs: I knew what they were, when they lived, and that they hadn't been alive at the same time as humans, at least from a scientific point of view. How to reconcile that with 6,000 years of the creation story? That was my first dilemma. As you can imagine, it only got more complicated from there. What made it so difficult was that I was still a kid, asking these questions. Eight years old and already a heretic. 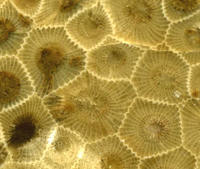 One fellow believer I corresponded with for a while sent me a beautiful piece of rose gypsum when she moved out west because I'd said I was interested in science and natural history.  In return, I sent her a petoskey stone (right), Michigan's state stone, which is a fossil of ancient coral reefs that covered the shallow sea bottom that's now Michigan. Each rough polygon is the fossil of an individual coral animal skeleton. I explained its origin when I sent it to her and she was confused that Michigan had been sea bottom. How could that be, in 6,000 years?

Some creationists (not the ones I know) think that God created all those fossils too, but that seems like another cruel trick by a cruel god. How much simpler if the creation story were a metaphor for the development, the evolution, of consciousness or civilization. The great time spans of geologic and astronomical history make sense then, and don't really matter except in their existence. But dogma doesn't suffer facts well. Hence all the illogical twisting and bending.

The Bible isn't a science book, and doesn't purport to be one, though some of its most fanatical thumpers insist it's the only book you'll ever need to read.  Then why, I ask, did God give us these big brains, the opposable thumbs, the creative instinct, the capacity for rational thought, if all He wanted was blind obedience? Does switching off your brain constitute the proper worship of God?

The question, I guess, is not how to encompass the contradictions of dogma and science—to hold two contradictory, impossible ideas in your head at once—but to sift out the dogma and leave the love of God. Easier said than done.