Life in the Fat Lane

There's a great blog called Shapely Prose that I read with faithful regularity. I only started reading it about a year ago, led there from Shakesville, another great feminist/liberal blog. I fell instantly in love with the hostess Kate Harding and her fellow bloggers, Fillyjonk and Sweet Machine, who all have attitude to spare and take no prisoners. And their issue is not just feminism, but one* of the last acceptable prejudices: fat people. If you think this isn't an issue, trying gaining 20 pounds. This is especially true of women, whose duty it is to be attractive to the male gaze. So yeah, fat is a feminist issue. Being fat and female is just asking for rude catcalls, like being a lone female at night is asking for rape.

This is why I love Joy Nash, too. Here's the latest of what she calls her "Fat Rants" courtesy of Shapely Prose:

All those rude remarks and nosy conversations and catcalls in her video? She's not just making those up. I've had nearly every single one of them said to me at one time or another. I've heard the catcalls and mean remarks from stranger so often that I now, like Joy, have a handy response memorized: "I can always get liposuction, but you will always be a moron." 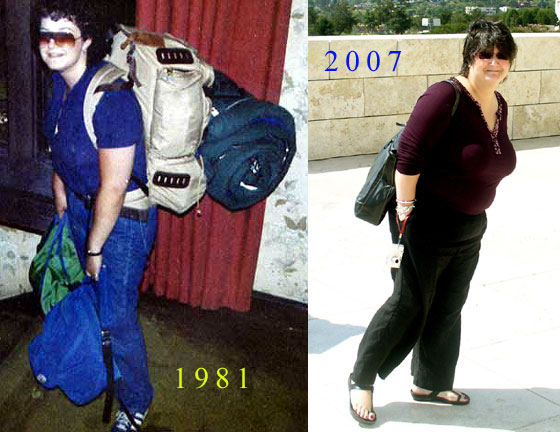 Now, lest you, the complete stranger get some crazy ass idea about what I look like, here's evidence. On the left is me in 1981, on my way to Europe for the first time, schlepping a 40 lb. backpack, which did not get any lighter over 6 weeks, let me tell you. I weighed about 135 then, and 125 when I came back. At that time, I kept hearing how if I would just lose ten pounds, I would look great. When I did lose it, did anybody notice or congratulate me? No. But I was strong, fit, muscular and healthy. And I had schlepped way too much shit all over England for six weeks. What doesn't kill you makes you strong. Literally stronger, in this case.

On the right is me in LA before Jen's wedding last year, where I weigh about 190. I'm still strong (I move my own furniture when I paint), not quite as fit, still pretty muscular, and healthy. And last year, when I went to Barcelona for two weeks, I didn't have any more trouble walking around there than I had twenty-six years before, with or without the backpack. The only reason I have any trouble keeping up with people is that I'm five feet tall and everyone's stride is longer than mine.

So yeah, I'm fat. I put on those extra pounds mostly during my last year of college, from having an ulcer that only stopped hurting when I ate. I refuse to diet now because they don't work, and they make me a bitch on wheels (not that anybody else notices), so my weight has stayed constant within 10 lbs for the last 25 years. I eat what I want, when I want, until I'm full, and I love good food. I used to eat a lot of junk food—ironically before I gained weight—but since I got fat, I've learned to eat healthy, and I don't mean just salads. I eat organic, home-cooked, and with healthy fats: olive and sesame oil, butter for flavor (there are some things that cannot be made with anything but butter and you're better off with a naturally occurring lipid than some chemical fake). I've gotten so used to what real food tastes like now that junk food mostly repels me. I don't have a car, so I walk everywhere. If I weren't too chicken to, I'd bike as well, like I used to. But exercise for its own sake? Nyet. Tried that. Bored me shitless. Here's the kind of shape I'm still in: When the first AIDS Dance-a-thon was held, I danced for four solid hours with the rest of the club kids. I did not take a breather or sit anything out. I think I sweated about five pounds off, and I felt great the next day. Not too shabby for a fat chick, huh? 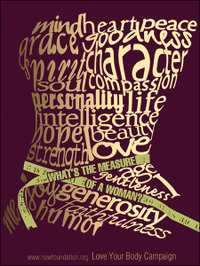 So I refuse to apologize for my size. I'm not embarrassed about it. Studies are starting to reveal that a lot of what's involved in what we weigh has to do with genetics, anyway, something I long suspected. My people in my family are all stocky peasants, on both sides; I knew I was never going to be Twiggy, or even as thin as my best friend. But why am I going on about this here, on this blog? Because this is part of who I am, too, and part of my feminism. The one thing that makes me sad about being fat is seeing how much women oppress each other about it. That insidious comment, "if only you would lose X pounds, you'd be so pretty," is possibly one of the cruelest things we say to each other. Fat ≠ Ugly. The next cruelest is the bad habit that truly naturally thin women have of saying "I'm so fat" in front of other women who aren't. Will you cut that passive-aggressive crap out, ladies? Either get your shrink to work on your self-image with you, or STFU. At least around me. Don't go spreading that hate around. Why do the patriarchy's work for them?

*(Note that I said "one" because there are others: LGBT, disability [fat is sometimes seen as a subset of this one; more on that later], mental illness, etc. And there are plenty that are no longer acceptable that have just gone [somewhat] subtle, like racism and misogyny. But where people will publicly shun you for yelling "Nigger" in the street, if you're a a white person, and rightly so, don't look for disapproval if you yell "Fatass!" Okay, enough qualifiers. This will piss somebody off, no matter what I say. Fuck it. It's my blog. Free speech for everybody, even if you don't agree with me. But don't expect me to allow flames.)