A day at the dentist is never a Good Day. Although it could be worse. Today, I'm grateful:

Phew! Worked like a navvy today, writing and getting book stuff done. Here's what I'm grateful for today:

Woken up at 8 AM by the guys repointing the bricks on the wall of my bedroom. Since I'm seven stories up, I'm grateful . . . 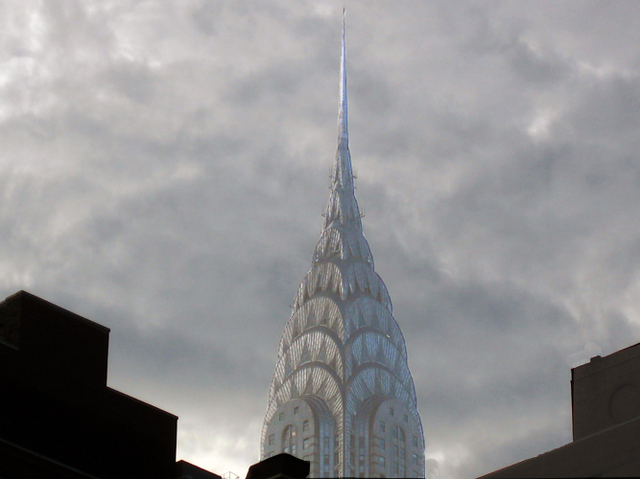 Hey! Look! It actually might make you happier to make a list of things you're grateful for. And somebody beat me to the idea of the Happiness Project, too. Great minds think alike.

So here's what I'm grateful for today, in more detail than the first post, because it does seem not enough to just make a list. Gratitude requires an explanation.

Rob and I were yakking the other night on the phone about my upcoming visit. As is usual with our conversations these days, it came round to how utterly happy he is in Maine. Every time I talk to him, he says how much he loves it there: the people are cool, what art he can find (and he's got an uncanny nose for it) is cool; the food's great; even the weather is good by him. He loves his apartment; he'll be looking for a house, soon. He likes his colleagues a lot and adores his students. I haven't ever heard him this happy with where he is and what he's doing; I think the closest might have his job with the Archdiocese in Detroit, but even that wasn't what he really wanted to do, which was teach. Now, the concatenation of place and work is making him as bubbly as a freshly popped bottle of champagne.

And that makes me happy too. I remember being that happy about finally living in New York when I first moved here, once I got used to life in a really big city. There are still days  when I look around and think "Damn! I live in the GREATEST PLACE ON THE PLANET!" though after 21 years, I'm not nearly as enamored of it as I once was. Not that I hate it or anything, or even dislike it, but it's a bit too familiar now, too sanitized, and some of the edge I really loved is gone. I can, as I've said before, now imagine living elsewhere, as I once could not. When the time is right, I'll leave feeling like it was a great adventure that's come to an end, as all adventures do.

This is not to say that it's been easy. I've had some really hard years here, hard enough to change and shape me into someone I probably would not have been without them. Rob has too. We both picked up and went to live somewhere people thought we were crazy for going to and had experiences that our friends and family can only imagine. But even when conditions have been less than ideal, both of us have somehow managed to be happy. As Rob said, it's a choice to look at your circumstances and decide whether you'll be happy or not.

Obviously, there are exceptions to this, like clinical depression, and it's pretty damn hard to be happy in the middle of a war or disaster. But in the everyday circumstances of life, I think most of us can decide whether we're going to roll with the punches or look at every little thing that happens as a personal affront or an obstacle. I have a couple of friends who do this, and it's a little wearing after a while. I know that sometimes it's not the big things that crush you, it's the accumulation of little balls of crap. But there's a way to keep from being buried in them and that's to keep going forward and let them roll off you. You might be knee-deep in crap then, but from that position, it's possible to bag it and sell it. It won't smell any better, but at least you'll get something out of it.

The thing is, it never stops coming, so you might as well learn how to deal with it. I have two philosophers whose words I frequently repeat to myself: Masahide and Mick Jagger. From the former comes the haiku "Barn's burnt down/now I can see/the moon"; from the latter, "You can't always get what you want/ but if you try sometimes,/you just might find,/you get what you need."

The last four years have been full of big changes for me, and the next few years are looking fairly uncertain at this point. My conversation with Rob last night reminded me that being happy isn't a passive activity. It doesn't just happen to you. Like anything worth having, you have to work at it. In that spirit, I'm taking a leaf from Lea Goode-Harris and her Tales From the Labyrinth. Every night, Lea writes down five things she's thankful for: "Are you ready for a change?" she says. "If the answer is yes, try this and see what happens. Just five words each night before you go to sleep."

So I'm going to try it and post them here. I thought I'd call this the Happiness Project. Here's the first five:

If anybody wants to join in, send me a link. If there's such a thing as a critical mass of happiness, maybe we can generate it.